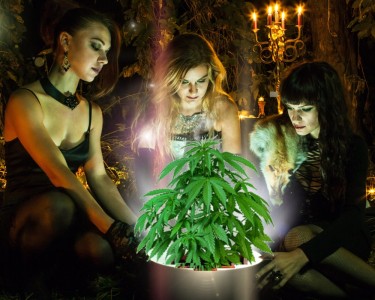 You may have been distracted by all the presidential election stuff spammed into your consciousness every day to notice that Cannabis is at an all-time high in terms of popularity. A recent poll set the plant’s popularity in relation to recreational legalization at 70%.

However – cannabis wasn’t the only ‘thing’ that has seen an uptick interest during the 2020s. Witchcraft and the occult in general has seen quite a surge in popularity these days. In fact, a few occult store owners have commented on the phenomenon.

“People have come in asking for spells for protection or charms for healing and we’ll work that with them. We also get a lot of requests lately for the election,” said Blake. [Store Owner of Malliwaybros in Chicago – source]

If you can take a step back and appreciate what’s going on here you will notice that we’re seeing a major shift in paradigm occurring within the US and the world.

The old establishment ways are crumbling and people are returning to more intuitive arts to express themselves, to find peace and discover their own spirituality.

Cannabis as a Catalyst for Psycho-Spiritual Transformation

I’ve been reporting on cannabis related news and ideas for over a decade now. At first, I thought that the shift in public perception about cannabis and drugs in general was due to a general awareness in the failure of the drug war.

I thought, “People are finally seeing the folly of their ways. You can’t legislate appetite, it only leads to chaos-manifest”.

These days however, I think that my original assessment was far too simplistic and monotone. I believe we’re in a radical paradigm shift, breaking away from older monotheistic institutions or “The Major Three Religions” that have dominated the world with an iron fist for centuries.

People do not want “more of the same” any more – it was one of the major reasons why Trump is even in the White House at this moment.

The institutions have failed us and when the shit hit the fan, the government bailed them out while “the people” got stuck with the bill.

Cannabis is more than just reclaiming the right to consumption but rather it’s a rejection of ‘institutionalized pharmaceutical model’ and a return to the ancient ways of plant-based medicine. In fact, you younger folk might not be aware of the origins of RSO and how they clandestine healer helped thousands combat and recover from cancer.

The trend seems to be extending to the other medicinal substances such as psilocybin, DMT, LSD, MDMA and so forth.

The Occult as a Map to the Unconscious

If you truly venture down the path of studying the “occult” you’ll quickly realize that a lot of our modern science, psychology, chemistry, medicine, and much more are intricately intertwined with “witchcraft” and “Magick”. Notice the difference of spelling.

Yet when the rationalist movement beset the sciences, they made way with all of the rituals and mysticism. Rather, an embrace of logic and reason was preferred and while this did help get us to where we are now – it seems that a fundamental part of ‘self’ was abandoned in the pursuit of knowledge.

Arguably – the subconscious mind is the master of your reality. Most of what you like and dislike, the friends and lovers, the situations of joy and sadness, are mostly a by-product of subconscious processes. While logic and reason is a great way to consciously communicate data, it is painfully inefficient when communicating with the unconscious.

This is where ritual and mysticism comes into play. The unconscious understands metaphor and imagery above words and data. The occult embraces this concept and ‘dresses the knowledge in robes and chants’ in order to align both the conscious and the unconscious mind to focus on a single point. At least to my understanding. I’m sure many would differ in opinion.

Nonetheless, we’re seeing the occult fill the space that once belonged to monotheistic myths of the previous era.

The Rise of the Cyber Shaman

With everything pointing towards more integration with technology and a fundamental paradigm shift in religion, government, and generalized spiritual practices – I believe that the ‘new religions’ of the future will incorporate elements from different psycho-spiritual paradigms.

However – I do see a significant return to the notion of plant-based medicine in conjunction with a global shift towards increasing the production of renewable energy sources.

Who knows what will be the next great spiritual revelation that will fundamentally change the way we do things, perhaps a mix-match of techno-spiritual principles where labor is outsourced to machines and where people can explore their consciousness with various different means obtained from the occult.

Perhaps I’m only talking to the wind – but I don’t think so. I’m sure those who are still reading this article at this point can attest that there has been a “calling” and that these “back channels have become far more active”.

Could one consider a shift to plant-medicines as another symptom of this great social transformation? Have you been dabbling in the Dark Arts? 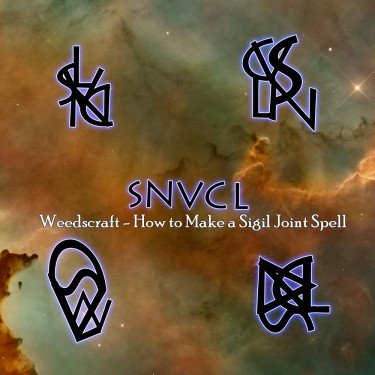 HOW TO MAKE A SIGIL JOINT SPELL IN WEEDSCRAFT!